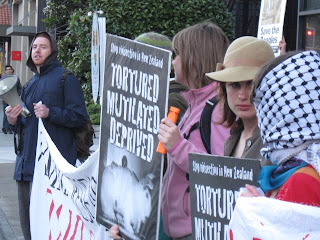 About 30-40 people turned up for the protest on Wednesday afternoon against the vivisectors conference and made a lot of noise outside the Duxton Hotel.
The protest was reported by Newstalk ZB radio and NZPA. A spokesperson for the National Anti Vivisection Campaign talked about vivisection in NZ and what the people who attend ANZLAA are involved in, and a speaker from the Save the Beagles campaign talked about the regular protests against the Valley Animal Research Centre near Palmerston North and in Napier. There were a couple of carloads of Police watching the protest. We presumed they were there to arrest the vivisectors for animal cruelty and we made an appeal on the megaphone for them to come out of the hotel and give themselves up but they declined.

Some of us returned Thursday lunchtime for a smaller but noisier protest as well. There was obviously no crime happening in Wellington today as the Police turned up again and spent a while taking photos of everyone who looked like they were with us.

Dont forget the WARN meeting this sunday, details below
Posted by warn at 4:41 PM

why let the poo lice have the pleasure of getting your pictures ,your only helping them to repress you later on if they choose to