Invitation: Vegan Feast at St John's in the City
You are invited to a vegan feast on the 22nd of May, fundraising for the Sea Shepherd Conservation Society and the New Zealand Open Rescue Collective. Please come and support the work of these groups to directly save animals!

The Sea Shepherd Conservation Society (SSCS) is an international non-profit, marine wildlife conservation organization, which uses innovative direct-action tactics to investigate, document, and take action when necessary to expose and confront illegal activities on the high seas.During the 2009/2010 whaling season, Sea Shepherd saved 528 whales that would otherwise have been killed by the Japanese whaling fleet, cutting the kill quota by more than half. Of the fifty humpback whales that were targeted, the whaling fleet did not take a single one, and of the fifty fin whales that were targeted, they managed to kill only one.

The New Zealand Open Rescue Collective formed in late 2006 after NZ activists became immensely frustrated with the Government's lack of real action for animals on factory farms. 20 years of campaigning against factory farming using legal means such as protesting and lobbying saw little to no changes for the animals. The Collective's aims are to openly rescue animals from places of abuse, to expose hidden suffering and to consistently provide irrefutable evidence why factory farming should be banned. Open Rescue's most recent action has been to save two piglets from a New Zealand pig farm in April 2010. These piglets will now never have to endure the legalised confinement and deprivation that their mothers still endure. They will never feel the restriction of metal bars or be treated like production machines. 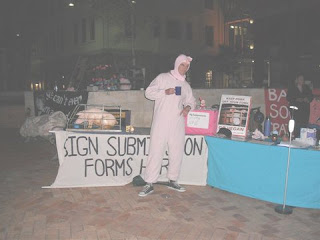 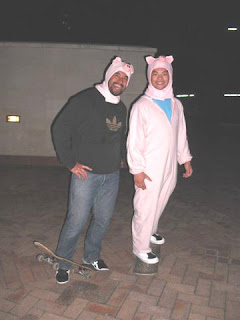 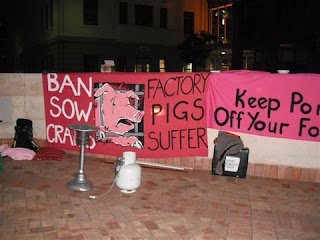 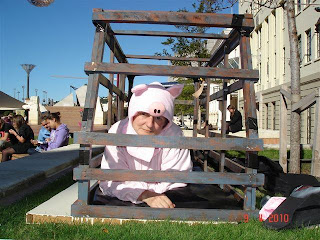 Wellington animal rights activists held a continuous 48-hour vigil against factory farming at Civic Suare from noon Friday 9 April to noon Sunday 11 April, doing shifts inside a sow crate and experiencing a tiny taste of the confinement that pigs suffer.

Most people were very supportive - our main stress was running out of submission cards for people to sign! Around 2,000 people signed submissions against factory farming. We met lots of enthusiastic kids, some of whom wrote us messages on pig or flower shaped stickers, which we attached to the bars of the crate - such as "hi guys, go pigwise!" and "Let the pigs go free". Sue Kegley came down to support us on the Friday, and spent time in the pig crate, as did Loren Horsley from the movie Eagle versus Shark. The Animal Rights and Wrongs radio show did a live interview with us on Saturday morning, and the Vegetarian Society organised a stall next to the vigil on Saturday afternoon.

During the evenings we lit candles and used the Civic Square stall as a base for roaming people in pig costumes who walked around the central city, collecting more submissions. We had interesting conversations as in the evenings people were more relaxed and willing to give time to discuss the issues (though we discovered that Courtnay Place on Saturday night was better to avoid). On Saturday night a couple of skaters came past the vigil. We talked to them about factory farming, and they became so enthused that they put on pig costumes and skated off to collect signatures for the submission against pig farming - returning incredibly quickly with 60 cards filled in!

The vigil ended with a delicious vege sausage giveaway - thanks to Trudi from SAFE! Some non-vegetarian punters were very impressed that the sausages tasted so good.

Thank you to all the groups who supported the event - WARN, SAFE, Campaign Against Factory Farming, Animal Freedom Aotearoa, and the Vegetarian Society.
And an enormous thanks to all the volunteers who did shifts in the sow crate, sat on the stall, supported us through the cold night hours, or came down to talk to us. Activists arrived from Palmerston North and Whangarei to help with the vigil - amazing!


We also have more animal rights events coming up in Wellington - WARN and Sea Shepherd are organising a joint fundraising dinner on Saturday 22 May at St. John's Hall. More information soon!
Posted by warn at 7:37 PM 1 comment:

Have a Merry Vegan Christmas

Have a vegan christmas, and while you are celebrating, support the Sea Shepherd Conservation Society, who are spending Christmas on two ships in Antarctica, trying to disrupt the whale hunt.
http://www.seashepherd.org/nz/
Posted by warn at 2:23 PM 1 comment:

Talk on diet and environment

"Our Diet - Leading To A Sustainable Future Or Killing Our Planet?"
A talk by Dr Aryan Tavakkoli MBBS FRACP.

talk on Veganism and Vegan Fitness 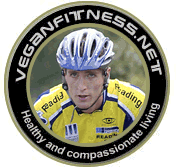 WARN is very proud to present a public talk on veganism and vegan fitness, by the founders of one of the best vegan websites on the internet, www.veganfitness.net
A UK based vegan powerlifter will be talking about veganism, nutrition and sports, so come along this Sunday.